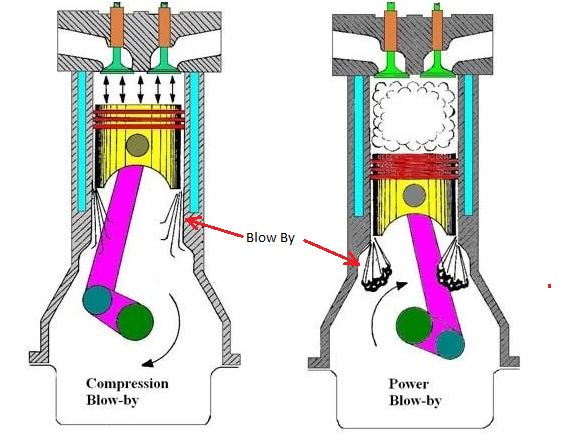 Blowing in the wind: Blow-by on large diesel engines.

Every engine has some level of blow-by, but when it comes to a large diesel, the concern is amplified.

As farm machinery becomes more expensive, many turn to equipment purchased at auction with an unknown background and service record. Only to find once back home, the engine is a puffer.

When you combine a large cylinder bore, high cylinder pressure through turbocharging, many hours of use, and marginal maintenance, excessive blow-by results.

The leakage of any combustion gases, air, or pressure into the engine’s crankcase is considered blow-by.

About 60 percent of the blow-by enters the crankcase on a large diesel engine by going past the piston rings. This occurs when the pressure differential in the cylinder bore is the greatest compared to the oil pan’s pressure.

Thus, blow-by is highest during the engine’s expansion (power) stroke and, secondly, the compression stroke.

Also, blow-by is intrinsically linked to engine temperature and load.

When measured in cubic feet per minute, a 12-liter engine in good mechanical condition can experience at idle 1.5 cfm of blow-by at normal operating temperature but 3.5 cfm when cold. Under full load, the blow-by maybe 2.7 cfm.

The remaining 40 percent of blow-by comes from sources that most do not consider, such as the turbocharger or the compressor for the truck’s air brakes.

When diagnosing an excessive blow-by condition, you need to look at any component on the engine linked to the engine oil and, thus, the crankcase.

The source of the blow-by will determine how it presents and the potential long-term implications.

Blow-by that goes past the piston rings not only pressurizes the oil pan but introduces combustion gases that contain unburned fuel, particulate matter (PM), and oxides of nitrogen (NOx) emissions.

They also create condensation due to the temperature differential of combustion gasses and the crankcase. When mixed with engine oil, blow-by produces sludge and acids that attack all engine parts. The unburned fuel dilutes the engine oil’s lubricity and viscosity, attacking engine bearings, valve train, and cylinder walls.

When equipped with an engine brake, a higher than usual blow-by will be induced when the system is engaged. When evoked, the piston moves around, and the rings flutter, allowing them to lose their seal. The engine brake is meant to help stop the vehicle and decrease friction material wear and should not be excessively used.

Blow-by tears the oil from the piston and rings, and at first, it vaporizes, and then it becomes an aerosol, which we see as a film or fumes around the crankcase vent tube.

Two different battles are going on: eliminate the blow-by sources; what to do with it once it enters the crankcase.

The key to minimize blow-by is rooted in one word, sealing. An excellent seal needs to be created and maintained between the piston rings and the cylinder wall and the other areas such as the turbocharger and, if applicable, a compressor.

This thought process is akin to using a pre-emergence weed killer in crops; do not let the weeds take hold and then try to kill them. Keep the combustion gases and pressure where they are supposed to be, and then blow-by is not a concern.

Since every engine has some level of blow-by, the crankcase needs to have a way to breathe.

This is challenging with a turbocharged diesel versus a normally aspirated gasoline engine.

A PCV valve cannot be employed.

A heavy-duty diesel depending on its use and age, may have an open vent pipe. This is nothing more than its name implies. Its task is to relieve the crankcase pressure and does little to remove any combustion gasses or moisture.

Newer engines may employ some style of a separator, and that is considered a closed system. With this design, the engine oil is separated out, and the combustion gases are fed back into the induction system. The oil is removed so that it does not damage the vanes on the turbocharger compressor wheel and foul the intercooler’s heat exchange capability.

Some engines may have an oil separator and an open vent pipe.

You need to familiarize yourself with the crankcase ventilation system function on every one of your diesel engines since if it fails, the engine will experience excessive wear and be prone to oil leaks from the pressure in the oil pan over time.

Check out more of Ray's words of wisdom by listening to his podcast HERE!

Stay in touch with us on social media